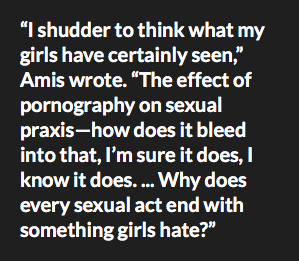 This is a tremendous article about famed British novelist Martin Amis. Amis is also known for both speaking and writing about what he considers to be the essential nature of the Sexual Revolution, and the human misery that preceded it.

I want to encourage to read the entire article, it is fascinating and very disturbing at the same time. I will give you some highlights.

Pornography is reshaping sexuality, as detailed in Dr. Norman Doidge’s fascinating work on the neuroplasticity of the brain. Children are accessing pornography younger and younger—the average age of first exposure is now nine—and it is serving as their sex education. That is why, in later years, pornography will often determine the nature of their sexual interactions…

The article concludes with:

Pornography has normalized virtually every sex act, poisoned the minds of men, and groomed women for sexual violence like some horrifying cyber-pimp. It has spread hatred and death, and chewed up and spat out thousands of young girls, leaving them broken and shell-shocked. It has changed the very nature of human sexuality, deforming it into something that even the first purchasers of Playboywould not recognize.

Martin Amis is concern this poison is hurting his children…as we all should.