Thoughts on life by Theodore Roosevelt 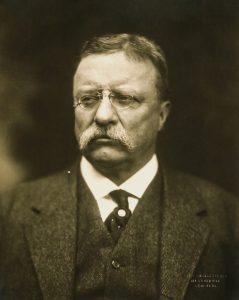 Great Ideas of Western Man. 1959
The things that will destroy America are prosperity-at-any-price, peace-at-any-price, safety-first instead of duty-first, the love of soft living and the get-rich-quick theory of life.

Letter to his son Kermit, quoted in Theodore Roosevelt by Joseph Bucklin Bishop, 1915
“If a man does not have an ideal and try to live up to it, then he becomes a mean, base and sordid creature, no matter how successful.”

Autobiography
“I abhor unjust war. I abhor injustice and bullying by the strong at the expense of the weak, whether among nations or individuals. I abhor violence and bloodshed. BUT it takes strength to put a stop to abhorrent things.”

Thoughts on manhood
“We need the iron qualities that go with true manhood. We need the positive virtues of resolution, of courage, of indomitable will, of power to do without shrinking the rough work that must always be done.”

Abilene, KS, May 2, 1903
“There is not in all America a more dangerous trait than the deification of mere smartness unaccompanied by any sense of moral responsibility.”

“Citizenship in a Republic,” – Speech at the Sorbonne, Paris, April 23, 1910
It is not the critic who counts: not the man who points out how the strong man stumbles or where the doer of deeds could have done better. The credit belongs to the man who is actually in the arena, whose face is marred by dust and sweat and blood, who strives valiantly, who errs and comes up short again and again, because there is no effort without error or shortcoming, but who knows the great enthusiasms, the great devotions, who spends himself for a worthy cause; who, at the best, knows, in the end, the triumph of high achievement, and who, at the worst, if he fails, at least he fails while daring greatly, so that his place shall never be with those cold and timid souls who knew neither victory nor defeat.

“The Strenuous Life”
“Thrice happy is the nation that has a glorious history. Far better it is to dare mighty things, to win glorious triumphs, even though checkered by failure, than to take rank with those poor spirits who neither enjoy much nor suffer much, because they live in the gray twilight that knows neither victory nor defeat.”

Acceptance speech at the 1906 Nobel Peace Prize
“Peace is generally good in itself, but it is never the highest good unless it comes as the handmaid of righteousness; and it becomes a very evil thing if it serves merely as a mask for cowardice and sloth, or as an instrument to further the ends of despotism or anarchy.

We despise and abhor the bully, the brawler, the oppressor, whether in private or public life, but we despise no less the coward and the voluptuary. No man is worth calling a man who will not fight rather than submit to infamy or see those that are dear to him suffer wrong.

No nation deserves to exist if it permits itself to lose the stern and virile virtues; and this without regard to whether the loss is due to the growth of a heartless and all-absorbing commercialism, to prolonged indulgence in luxury and soft, effortless ease, or to the deification of a warped and twisted sentimentality.”