Dad, why do women hate men? 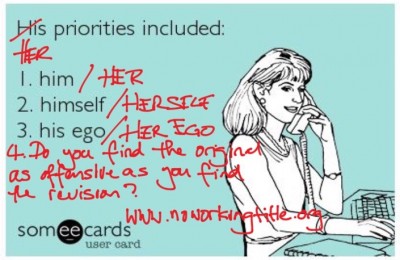 I was sitting with my 15 year old son and he was looking at Pinterest with me, at some of my work, some of the people I interact with, and some of the material posted. He went quiet for a while, and I waited, and then he said, “Dad, why do women hate men?”

Before I launched into the, ‘That’s not true” response, I asked myself, “Why would he say that?” For the next 2o minutes, we went through pin after pin on board after board, the vast majority similar to the one I have posted in this article.

We talked about how he had been told by female relatives that “men are disgusting because all they want is sex.” He talked to me about how modern music and movies and TV shows seem to make men out to be stupid and incompetent.  How all the heroes in movies had become women–he didn’t mind that, he thought Black Widow was awesome and hot and said it was cool how a girl could be awesome and hot.

Here is my question to you: Ladies, are you helping your boys grow into men, or are you molding them into your own bitter images of yourself?

I was sexually, mentally and emotionally  abused by my mother and father and their friends from the age of 4 to 16.

I remember, and I write about it in my book, that my mother would have her friends come to the house, professors on womens’ issues from the university where she worked. As a 13 year old boy, I would be made to stand and address this group of 8 women. They would tell me that I had to argue the case as to what purpose men serve. Why should we allow men to exist? What role to men play in society except as sperm donors?

After week upon week of humiliation and degradation, all I could do was stutter and cry. At that point, when they had finally reduced me to that, they literally shouted for joy, “See, you’re useless.”

I have two daughters, and I have raised them to love themselves, believe in themselves and to fully enjoy life in the company of men. What my mother and my father did to me has never been allowed to touch my kids. I have gone out of my way to ensure that my issues don’t become theirs…What about you?

Have you been hurt by men? Maybe you have. Badly, quite possibly. But you have never been hurt by ALL men EVERYWHERE. Saying all men are bastards is like saying all women are stupid whores and sluts. You have no right and no justification to impose your broken view of the world on 49% of the population, most of whom you have never met. But particularly, this view imposes itself on your sons, your nephews and future son-in-laws.

Our past can either refine us or define us. Allow your past experiences to make you a better you, so you can help raise better young men and women and end once and for all the cycle of brokenness.